Barbie: Life in the Dreamhouse Wiki
Register
Don't have an account?
Sign In
Advertisement
in: Characters, Main Characters, Females,
and 9 more

Barbie is the lead character and titular main protagonist of the web series Barbie: Life in the Dreamhouse. She lives in a large pink mansion called the "Dreamhouse" along with her sisters Skipper, Stacie, Chelsea, and their pets; Blissa, Taffy, and Tawny. Barbie is a fashion icon and has had over 135 careers, and counting. Despite being a celebrity in Malibu, she is friendly, humble and good-natured. Barbie is shown to like the color pink a lot and she is mostly shown wearing pink. Barbie is voiced by Kate Higgins.

In Season 1, she wears a glittery pink tank top with light pink straps, a glittery light purple ruffled skirt with silver lining on each layer and pink high heel sandals. Her jewelry consists of two gold beaded necklaces, and gold bracelet, and pink dangling earrings. Her hair is in an updo and has parted bangs as well.

In season 4, Barbie wears a pink dress is a glittery top with pink bows on the straps and a pink and white striped skirt with a white, pink-outlined white band around the waist and pink heels. Barbie wears multiple beaded necklaces with silver, white, and pink beads. Her earrings remain the same, except they now have pink ends. Her hair is now changed, as she has fringed bangs and she ties it up in a high ponytail.

In Season 6, she wears a white shirt that fades to pink at the bottom with black stripes, brown pants with a black and red checkerboard pattern, a black leather jacket with white fur on the collar and a silver-white zipper, and pink necklaces. Her hair is loose, except for a partial braid.

In Season 7, Barbie wears a gray shirt with white polka dots and a blue jersey with white long sleeves, two white stripes on the collar, and a pink "B" on the left. She has a brown beaded necklace with a pink square in the middle. Her earrings are similar to the ones from Season 1, but are a darker pink. Her hair is styled in a high ponytail and has fringed bangs again.

Barbie is a very passionate, bubbly, kind-hearted lady and never has any bad intentions or will. She always helps others, even despite Raquelle's evil schemes towards her. She is shown to be a social butterfly and outgoing, easily making friends, as she is a loyal, friendly, generous, and tries her hardest not to upset them. Barbie is a fashion enthusiast, even owning her own giant boutique and is usually prepared in case of a fashion emergency/disaster.

Barbie in her winter bathing suit

Wow. That's a lot to hold Ken. Do you need a hand? 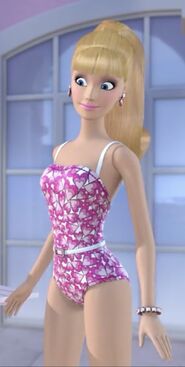 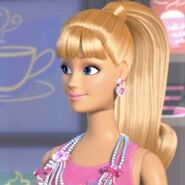