Barbie: Life in the Dreamhouse 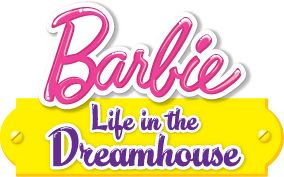 Barbie: Life in the Dreamhouse is an animated web series based on Mattel's popular Barbie franchise. Created by Rob Hudnut, David Wiebe and Michelle Cogan after the death of Elliot Handler, the last surviving co-founder of Mattel, it was produced by Arc Productions with voice-over production added from the Resnick Interactive Group. The show premiered on the official website, Netflix and YouTube on May 11, 2012 and ended with a tribute video released on November 27, 2015. The show has since been broadcast on multiple kids' TV networks around the globe and is translated/dubbed into 21 different languages, and is optimized both mobile and tablet PCs.

The series is set as a reality TV-esque show following Barbie and her friends Ken, Teresa, Nikki, Midge, Summer, Ryan and Raquelle, as well as her sisters Skipper, Stacie and Chelsea and their pets Tawny the horse, Taffy the dog and Blissa the cat in the day-to-day activities that take place in the Dreamhouse and surrounding areas.

Much of the humor in the show derives from parodying and lampooning both the traditional reality TV format and the Barbie franchise itself - the dolls, for example, are perfectly aware that they are dolls and use oversized items, warn of the dangers of cutting their hair because it never grows back and need to wear sunscreen so that they don't melt.

The series has gathered a following on various sites around the internet, most notably Tumblr, whose members are collectively referred to as Dreamhousers.

A 3D CGI-animated spin-off TV series, Barbie: Dreamhouse Adventures, was promoted throughout 2017 and officially released on Netflix on May 3, 2018 in the US and globally afterwards.

The series has a main cast of eleven Barbie dolls, two of which are male, in addition to three Barbie doll pets, and a number of supporting and background characters who are compromised of fish, car parts, celebrities/news reporters and a sentient closet.

The only doll whose age is definitively known is Chelsea, who turns six during Happy Birthday Chelsea. Skipper appears to be between 14 and 16 years old, while Stacie falls somewhere in between her two sisters. The topic of Barbie's age was brought up multiple times during Gifts, Goofs, Galore, with no doll being able to provide an answer until Barbie told them at the end of the episode. Unfortunately for us, this was blocked out for the viewers by Shoe-Vacuuming Robot. Barbie is more than 43 years old as mentioned in the first episode. Ryan and Raquelle are the same age, as they are twins, and Ken, Teresa, Nikki, Midge and Summer are assumed to be around the same age as each other.