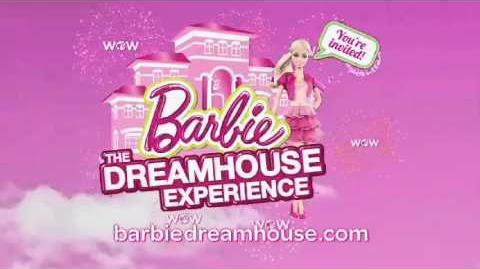 Barbie: The Dreamhouse Experience is a life-size replica of The Barbie Dreamhouse from Barbie: Life in the Dreamhouse. The Dreamhouse is 30,000 square feet and has interactive and personalized touches. It was announced on November 25, 2013, and will open publicly in spring 2014 at Mall of America, 60 East Broadway, Bloomington, Minnesota 55425 in the Southeast corner of Level 3. It is part of a 65,000 square foot entertainment center designed by EMS Entertainment that will feature three spaces for exhibits such as the Dreamhouse, which will stay for at least two years.

The Dreamhouse has different rooms and living areas from the show such as the kitchen (that guests can virtually bake in), living room, The Barbie Bathroom and The Barbie Bedroom and The Barbie Closet (where guests can virtually dress up in Barbie's clothes and view outfits from Barbie's 130+ careers throughout the years). Other areas include a library, Barbie's balcony and a fireplace. The Dreamhouse's virtual pink elevator transports guests to each floor.

Entertainment World, a 6,500 square foot area, has costumes, the Pop Star Stage and choreographer, the Fashion Runway, where guests can star in a fashion show, and a make-up studio where guests can get makeovers. The Barbie Cafe has food and drinks and is located at the entrance of the Barbie Dreamhouse.

The opening and closing hours are generally open to change, and change seasonally, but these are the general times:

Guests aged 14 or under must be accompanied by an adult.

Guests have to email Group Sales at groupsales@moa.net to check availability for times to book their party and discuss details such as special wishes. The Dreamhouse hosts Birthday parties for groups of up to ten children, with a hostess for the group and a tiara for the birthday child. There are also tiara Barbie themed cupcakes. The day roughly consists of a birthday party crew taking the group on a tour of the Dreamhouse for at least an hour so they can fully explore. They would then go to Fashion World for about 20 minutes.

Community content is available under CC-BY-SA unless otherwise noted.