Barbie: Life in the Dreamhouse Wiki
Register
Don't have an account?
Sign In
Advertisement
in: Characters, Main Characters, Females,
and 2 more

Midge Hadley is a main character in Barbie: Life in the Dreamhouse. She is Barbie's childhood best friend, having grown up together in Willows, Wisconsin. She joined the show partway through the third season. She doesn't trust objects that are new or electronic as seen on The Amaze Chase. Her name is Midge Hadley Sherwood after marriage to Alan Sherwood in the original Barbie franchise, but it is presumed that in the Life in the Dreamhouse franchise, Midge never got married and Alan doesn't even exist.

The original bestie Barbie from Willows, Wisconsin, Midge is a throwback to the 1960s. Thanks to Barbie, she’s gone from flashback to flash fabulous in no time, but when she gets nervous (especially around Ryan) she reverts back to slang like groovy and threads. It’s her super smarts and quirky style that make her absolutely a-dork-able!

Midge has fair skin, blue eyes, and long strawberry blonde auburn hair with straight-cut bangs that is curled up at the end. She used to be all black-and-white, possibly referencing the colors of old television. For season 3, Midge wears a strawberry orange bolero that reaches her elbows and matches her hair colour lined with white polka dots over a festive red blouse and a white necklace with teal gems on it. She also wears a dark blue skirt with a red rose pattern, a gold bracelet on her right wrist and pink heels. For season 4, Midge wears a sleeveless dress consisting of a pinkish-red top lined with white polka dots identical to the ones on her old bolero, no sleeves, a white stripe and a white collar; the bottom is a white skirt with a blue and pink flower pattern. Midge also wears a pink bracelet with a bow in the centre and pink high-heel shoes.

midge in a one piece bikini and with a book shelf 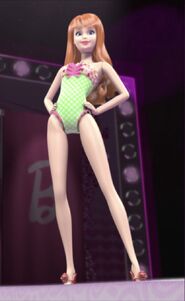 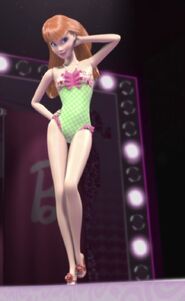 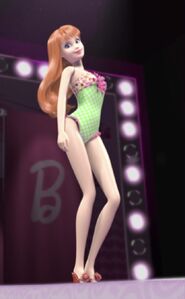 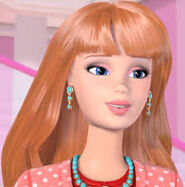 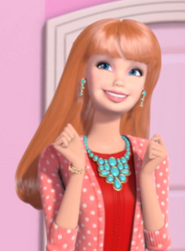 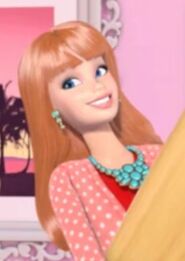 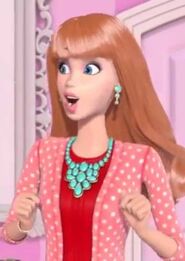